Rubies, the official birthstones of the month of July, have long been considered the king of gems thanks to their bold, commanding appearance and regal gleam. As one of the most durable — and, indeed, most valuable — birthstones after the diamond, this stone has been praised and covetted in many cultures all over the world for thousands of years. Ever wondered about the ins and outs of the red, red ruby, and what makes it so special to all the July babies out there?

Varying in color from bloody crimson to dainty pink, rubies are a type of aluminium oxide which takes the form of a crystal called corundum; one other popular precious gem which is formed in this way is the blue sapphire, with the chemical reaction differing just slightly to give them their different colors. For its part, the ruby takes its name from the Latin word ruber, which simply means “red.” It shares its pedestal as a birthstone of this specific color with the garnet, which is associated with the month of January. The ruby, however, is known for its richer, pinker tones, and the garnet more often leans towards rust and brown.

THE RUBY IN HISTORY

One of the first recorded mentions of the ruby in history as we know it comes from the literature of the North Silk Road, a prehistoric trackway that facilitated trade between China and the nations of the west. In around 200 B.C., a massive shipment of rubies was said to have left China along this passage for distribution in ancient kingdoms such as Persia and Rome. Indeed, history indicates that rubies were held in high esteem in Asian countries long before they gained such prominence and worth in the rest of the world. The stones were used to decorate armor, scabbards, and horse-riding equipment in both China and India, and were commonly buried beneath the foundations of new buildings as a way to secure future good fortune for the coming years.

For centuries, the world’s largest ruby mining source was the Mogok Valley in upper Myanmar (previously known as Burma). However, this stone has made natural appearances in many corners of the world, with exceptionally beautiful specimens having been found everywhere from Brazil, to Australia, to Scotland, to Madagascar. However, the only country in mainland Europe to have naturally-occuring rubies is the Republic of Macedonia, the soil of which gives the stones an unusual raspberry hue not found anywhere else. Because of this, the ruby is featured on the Macedonian coat of arms. In the U.S., rubies have been discovered in only a handful of states: Montana, North Carolina, South Carolina, and Wyoming.

Some of the most famous rubies in memory are attached to stories that often defy belief. The Liberty Bell Ruby, for example, is a sculpture of its namesake bell, shaped from the largest mined ruby in the world. The stone was discovered in east Africa in the 1950s, and given its distinctive shape in 1976 by sculptor Alfonso de Vivanco for the United States bicentennial. Once it had been inlaid with many high-quality diamonds, the piece’s worth clocked in at about two million dollars — and so it made headlines all over the world when it was stolen in a heist on November 1, 2011. Though four men were arrested and imprisoned for the crime in 2014, the Liberty Bell Ruby was never recovered.

At present, the world’s most expensive ruby (and, as matter of fact, the world’s most expensive non-diamond gemstone) is the Sunrise Ruby, most recently valued at $30 million. The specimen was mined in Myanmar, and is named after a poem penned by the famous 13th century poet, Rumi. The relevant verse reads: “The ruby and the sunrise are one. / Be courageous and discipline yourself.”

According to another poem, this time about Gregorian birthstones and first published by renowned American jeweler Tiffany and Co. in 1870, “the glowing ruby shall adorn / Those who in July are born. / Then they’ll be exempt and free / from love’s doubts and anxiety.” This makes reference to the association of the color red not only with pride and confidence, but also with passion and love. It also plays along quite beautifully with the principle traits of the Leo and Cancer signs of the Western zodiac, both of which fall in the month of July; Leo, the powerful lion, is typically viewed as a sign of great daring and self-belief, while Cancer is usually thought of as the most loving player of the total dozen.

When it comes to wearing ruby jewelry to show off your birthstone pride, there really is no wrong way to go about it. Whether it’s set in silver or gold, this jewel radiates luxury and class, and its immense durability means that it will stand the test of time to remain go-to accessory for years to come. Take, for example, this Silver Claddagh July Birthstone Ring. Ideal as a gift for the birthday of someone special, this ring applies the ruby’s lustrous beauty with the heart-shaped focal point of the Claddagh symbol, which is said to represent both romantic and platonic love. Clasped by a pair of hands (symbolizing friendship) and sheltered by a crown (meaning loyalty), it becomes a perfect representation of some of the most essential values of the Irish nation.

Alternatively, to add an element of personalization to the big moment when you ask that special lady to be with you forever, consider taking her birthstone into account with this Trinity knot ruby and diamond engagement ring. With its fiery gleam and gorgeous homage to the artwork of the Celtic era, it’s guaranteed to make for an authentically Irish “she said yes” moment! 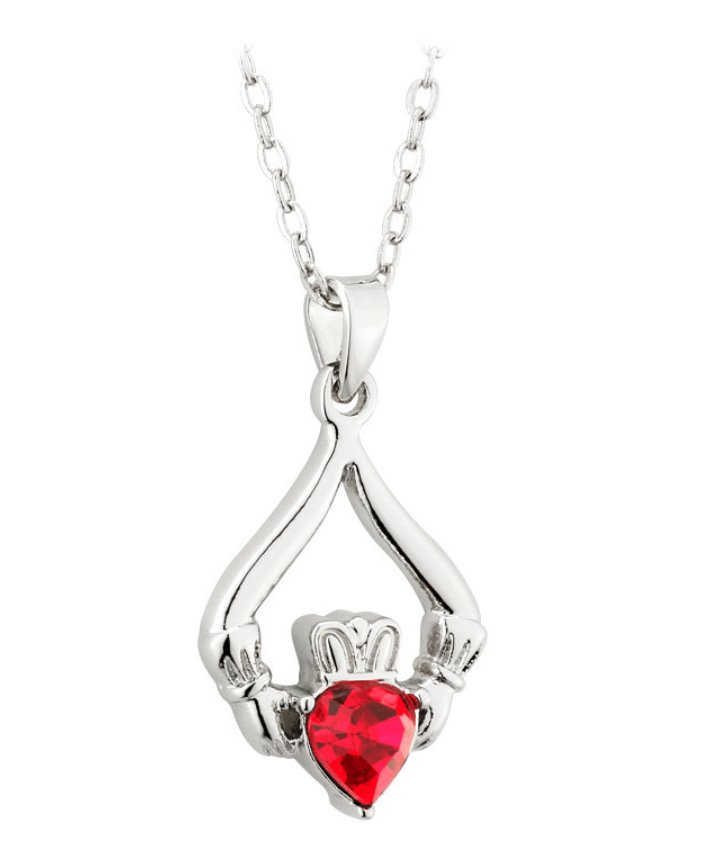 Is the ruby your personal birthstone — or do you just wish it was? Tell us all in the comments below! And be sure to browse our complete Celtic Birthstone Collection here!