Free US Shipping over $70. Shipping from US warehouse

This week marks 187 years since Glasnevin Cemetery in Dublin, Ireland first opened its gates. In that time, over 1.5 million people have been buried on its grounds, and it has grown to become one of the most significant landmarks of the North Dublin landscape. Located on the Finglas Road in Dublin 11, the site is impossible to miss: it spans an impressive 124 acres of land, and includes everything from a museum, to a cafe and restaurant, to a genealogy office where people from far and wide can make sense of their connections to distant relatives buried in the grounds.

Looking at Glasnevin Cemetery now, one would never be able to fathom a guess as to its humble beginnings. Once, it covered a meager nine acres, and acted as a beacon of hope for Catholics living under the oppression of Penal Law.

To live as a Roman Catholic in 1800s Ireland was to exist under the boot of the reformed Anglican Church of England. The Penal Laws were many and varied — Catholics were not permitted to hold political office, own firearms, marry those of the Protestant faith, or send their children abroad to be educated. However, the overarching theme was, of course, evident: Catholics were to suffer for the religious beliefs, deprived of the basic rights that those who practised Protestantism could safely enjoy. These restrictions grew so oppressive that performances of Catholic mass services and traditions were, at one point, almost unheard of, with many taking place in the secrecy of family homes.

Some Irish Catholics, however, were not to be forced into hiding their faith so easily. In defiance, many would perform a boiled-down version of their own burial services in designated Protestant graveyards all over the country, the alterations making it nigh-impossible for them to incur subsequent punishment. Nevertheless, these proceedings were met with suspicion and distaste by English authorities, and the tension came to a head when, in 1823, a Protestant sexton fiercely reprimanded a Catholic priest for his actions in public. News of this altercation quickly travelled, and a deep sense of unrest began to stir within the Catholic community.

Shortly after this occurrence, Daniel O’Connell (a political leader with Catholic rights at his heart, prompting many to nickname him “The Emancipator”) decided to take action. O’Connell launched a campaign to demonstrate that there was no law in place which outright forbade Catholics to grieve for their dead on holy ground, and demanded that a cemetery where both Catholics and Protestants could bury their loved ones in peace be established. It took nine long years, but eventually, his work bore fruit: a new cemetery open to those of every Christian denomination was planned.

Originally named Prospect Cemetery for the nearby townland of Prospect, Glasnevin Cemetery opened to much public attention on February 22, 1832. In appearance as well as function, it was entirely unique — a Victorian-style walled plot of land where, at a time of great turmoil in Irish history, peace and civility were greatly encouraged. On its inaugural date, the first person to be buried within the cemetery’s walls was an 11-year-old child by the name of Michael Carey. A resident of Francis Street, Dublin, Michael was the son of a respected but impoverished local scrap metal dealer, and the marker of his grave still stands tall in the cemetery today.

Despite the community fanfare upon its opening, Glasnevin Cemetery did not enjoy a prestigious reputation in its early years. In the 1830s and 1840s, informal pits were dug in the cemetery to accomodate for the amount of lives lost to cholera outbreaks. It also became known as the final resting place for those who couldn’t be laid to rest on denomination-specific ground: this meant unbaptised babies, atheist adults, and those who had taken their own lives. For children buried in Glasnevin, a special area known as the Angels’ Plot was conceived and implemented, and it is still used today as a special space for Irish families mourning the loss of an infant.

Because Glasnevin is a non-denominational cemetery, it is one of the few cemeteries in Ireland that allows for non-baptized and stillborn babies to be buried on consecrated ground in an area known as the Angel's Plot.

The standing of the cemetery saw significant change around the time that its original champion, Daniel O’Connell, was himself buried in a family vault on Glasnevin grounds in 1847. Today, this vault is known as O’Connell Tower, a structure which rises a massive 168 feet above ground and is an instantly-recognizable element of the Glasnevin skyline. The tower was damaged in a 1971 bomb blast, thought to have been planted by Loyalist terrorists during the Troubles, and was closed to the public for many years. As of 2018, it has been reopened. O'Connell's coffin, which is decorated in beautiful Celtic artwork, is available for viewing to all those who pay the tower a visit. It’s even said that touching it will inspire many years of good fortune.

O’Connell was an immensely-popular figure among the residents of 1800s Dublin, and because of this, the time after his burial saw the high society of Ireland take a new interest in Glasnevin Cemetery. Suddenly, it was hot property (insomuch as a final resting place can be). In the years that followed O’Connell’s death, many other major players in Ireland’s political reformation were interred in Glasnevin. These included nationalist political leader Charles Stewart Parnell (1846 - 1891); trade union leader James Larkin (1876 - 1947); president of Dáil Éireann Aurthur Griffith (1871 - 1922); Countess Constance Markievicz, Irish revolutionary, suffragette, and Minister for Labor (1919 - 1922); and renowned republican leader and player in the 1916 Easter Rising, Michael Collins (1890 - 1922). 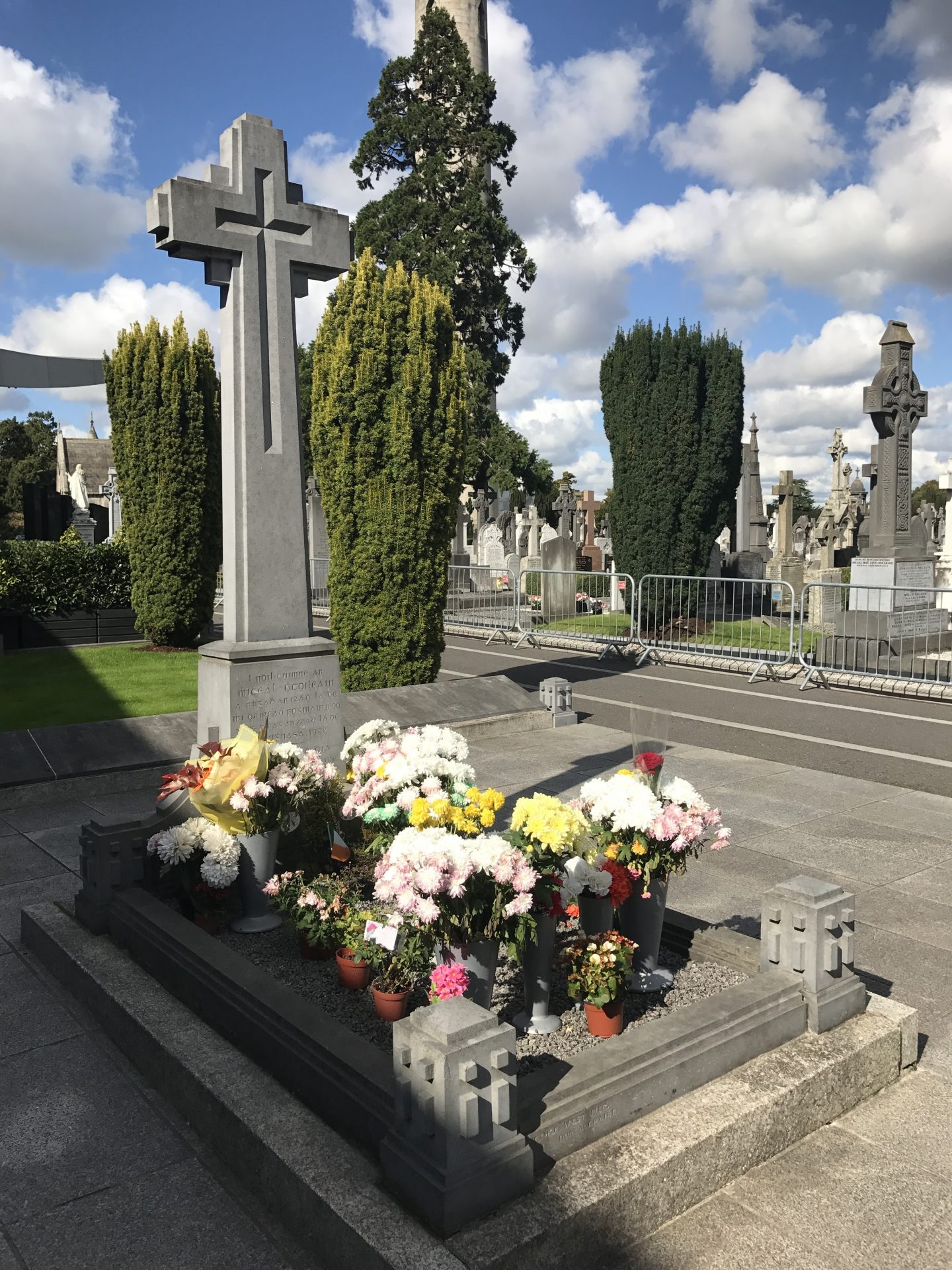 Also buried on the Glasnevin grounds is Eamon de Valera, one of the most prominent and discussed political figures in 20th century Ireland — though, considering he served as both head of government and head of state over the course of his career, is grave is less decorated than one might assume. De Valera’s headstone is simply-shaped and diminutive in size, made distinctive only by the faded etchings of a few small flowers. It is, to say the least, different to what many cemetery visitors tend to expect.

For almost two centuries now, Glasnevin Cemetery has also been the burial place of many of Ireland’s finest and most internationally-renowned artists. In 1864, Joseph Patrick Haverty, painter of the famous 1844 lithograph, The Limerick Paper, was interred. In 1889, poet Gerard Manley Hopkins, today considered to have been one of the best Victorian poets of his time, was also laid to rest there. Hopkins famously wrote the poem “Carrion Comfort” about the political unrest in Ireland during his lifetime, using his words as a way to urge those who suffered in the conflict to remain strong and hopeful: “Not, I’ll not, carrion comfort, Despair, not feast on thee.”

The passage of time has only increased the appeal of Glasnevin Cemetery burials for prominent figures and friends of Ireland. In more recent years, those who have been buried there include globally-acclaimed writer Brendan Behan. Behan’s first play, The Quare Fellow, was popularized the famous Irish music standard, “The Auld Triangle,” and is still frequently sung in musical sessions all around Ireland today.

In 1981, Christy Brown, an Irish writer and painter with cerebral palsy who was famous for his ability to write and type with only the toes of one foot, was also laid to rest there. Brown’s most known work is his autobiography, My Left Foot, which was made into a film of the same name seven years after his death. The film, which starred Daniel Day Lewis in the role of Brown, won multiple Academy Awards.

After a funeral which attracted thousands of mourners from all across Ireland, Luke Kelly, the lead singer of famous Irish band The Dubliners, was buried in Glasnevin in 1984. Kelly’s legacy and contributions to Ireland’s music industry resonate to this day. Numerous documentaries and anthologies have been created to capture his rollercoaster of a life — and so the simplicity of his gravestone engraving (“Luke Kelly — Dubliner”) shines all the brighter.

For all that Glasnevin Cemetery serves as the eternal home of so many influential Irish figures, it too has its own home in much of the country’s cultural and artistic legacy. The cemetery serves as the setting for the “Hades” episode of James Joyce’s famously intricate novel Ulysses. In this segment of the book, the protagonist, Leopold Bloom, reflects upon the nature of death and the suicide of his father. Aptly, both of Joyce’s parents are buried in Glasnevin Cemetery, and the site is part of a Joycean tour package available to visitors interested in the significance of this location for the writer.

Glasnevin Cemetery was also at the heart of the 2014 documentary, One Million Dubliners. Created by Aoife Kelleher, this film takes a look into the cemetery’s past, present, and future. “I’m a Northsider, so I’ve been aware of Glasnevin all of my life,” Kelleher told Irish America magazine in an interview in 2015. “It’s so iconic, and there are so many stories to be told here.”

And no one can deny that Kelleher speaks the truth. The history of Glasnevin Cemetery is saturated with the full spectrum of human experience; so much so that some say that shades of these experiences have imprinted on the land over the years. Every cemetery, after all, has its ghost stories.

Fortunately, most of the spirits rumored to haunt the pathways of this sprawling space are said to be benevolent in nature. When the Northern Irish Royal Navy captain John McNeill Boyd went down with his ship, the HMS Ajax, in 1861, it’s said that his dog, a hulking Newfoundland, was beside itself with grief. When Boyd was interred in Glasnevin, the dog stayed by the graveside of his late master, refusing to eat or sleep. Eventually, the poor creature starved to death. Today, many cemetery visitors report seeing the huge, immensely loyal creature, resting peacefully in that very spot.

Another popular urban legend concerns the Gravedigger’s Pub — a nickname held by Kavanagh’s Pub in Glasnevin for many years. The establishment is located so closely to burial grounds that a common tradition in ordering a pint of Guinness there has been to shovel a scoop of dirt against the outside wall.

The Gravedigger’s Pub’s proximity to so many graves have also inspired whispers of supernatural happenings at the bar. Many pub-goers have described seeing an older gentleman dressed in vintage tweed, who sits in a corner quietly and drinks a pint. When he finishes his drink, he’s been known to vanish in the blink of an eye. When this sighting is shared with a member of staff, they’ve been known to recommend buying this amiable but unknown spirit a pint for the road!

The current staff at Glasnevin Cemetery have been known to embrace the site’s paranormal side. In 2018, they hosted a Halloween festival on the grounds that the cemetery shares with the Dublin Botanical Gardens, which featured a pumpkin-decorating contest, “grave-digger tour,” and a storytelling supper.

In fact, the daily tours and frequently-changing museum exhibitions of Glasnevin Cemetery have an active role in cementing its enduring appeal. This is a place dedicated to observing — and even celebrating — Irish history, in addition to mourning those who have played so many varying, yet equally important, roles in it. To walk through the burial rows, reading the epitaphs of those who have called Glasnevin Cemetery their eternal home, is to glimpse the rich blend of talent, passion, and bravery that define the national spirit of Ireland. It is, for many, the true heart of the city of Dublin.

Have you visited Glasnevin Cemetery? Are you planning to stop by on your next trip to the Emerald Isle? Let us know all about it in the comments below!