In 1963, Irish Fine Gael politician John Costello addressed the legislature of Ireland on the “miserable trivialities of [Ireland’s] tourist advertising” to which it was limited for many years. The country, he claimed, had been pigeonholed as a tourist destination only for those who came for the “twee Ireland” stereotype. “Sometimes,” he said, “it descended to the lowest depths, to the caubeen to the shillelagh—not to speak of the leprechaun.”

Let’s speak of the leprechaun. His journey, which begins with respect and acknowledgement as a fairy trickster in rural Irish communities and today hovers, uncertain, between beloved kitsch and national embarrassment abroad, is one worthy of contemplation. Let’s speak of it all.

HOW THE LEPRECHAUN GOT ITS NAME 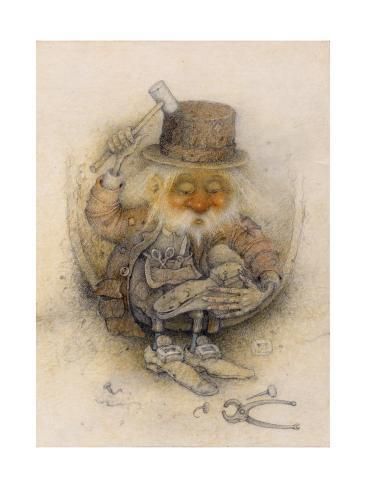 In traditional folklore, the leprechaun was most often depicted as a cobbler, as in this illustration by Wayne Anderson for The Leprechaun Companion (1999) by Niall Macnamara.

As he was originally referred to, the leprechaun was a member of the aos sí fairy family. Such creatures were said to live underground in fairy hills (aos sí means “people of the mounds”), far across the western sea, or, in some cases, in an unknowable supernatural realm that existed parallel to the human world. They have been called the ancestors of humanity, the spirits of nature, and the alternate forms of powerful gods and goddesses. Such fairies were a mercurial people, vengeful, proud, and not to be crossed without ample forethought.

For his own part, the leprechaun takes his name from the old Irish word leipreachán, defined by lexicographer and historian Patrick Dineen as “a pygmy or sprite.” An alternative spelling, leithbrágan, comes from the words “half” and “brogue” or shoe, due to the frequently-depicted image of a leprechaun hard at work cobbling a single shoe.

THE LEPRECHAUN IN FOLKLORE 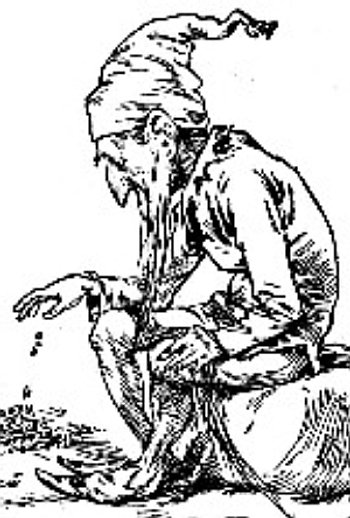 A leprechaun counting his coins, from an engraving, c. 1900. (Wikimedia Commons)

The earliest known reference to a leprechaun comes from the medieval tale called Adventure of Fergus, Son of Léti, and it’s a far cry from the benign representations we see in cartoons today. In the story, the King of Ulster falls asleep on the beach, only to awake shortly after to three leprechauns dragging him into the ocean in an attempt to drown him. He turns the tables on his captors, overpowering them, and they agree to grant him three wishes in return for their release: one is to gain the ability to breathe underwater, to prevent such a problem ever arising again.

The King of Ulster’s cunning wish is representative of a common old Irish belief—that leprechauns were practical jokers who would often achieve their goals by way of finding loopholes in any given rulebook. Their only true loyalty, most stories seem to suggest, is to themselves, an observation which prompted writer David Russell McAnally to posit that leprechauns were the sons of an “evil spirit” and a “degenerate fairy,” and is thus unable to be considered “wholly good nor wholly evil.”

In terms of appearance, the leprechaun varies depending on which region of Ireland (or, indeed, the world) he has been spotted. Most interestingly, the conventional belief that a leprechaun is always clad in green was a 20th century invention—before that, it was held that he favored red clothing. This idea was supported by Irish writer and famed mysticist W.B. Yeats, who believed that it was the custom of solitary fairies (or the magical “commoners”) to wear red, whereas green was reserved for the aristocratic trooping fairies, who travelled the length and width of Ireland in long processions by night. However, this is not to say that the trickster sprite in question took no pride in his appearance. 1831, Samuel Lover, an songwriter and novelist, wrote: “[The leprechaun is] quite a beau in his dress, notwithstanding, for he wears a red square cut coat, richly-laced with gold, and inexpressible of the same, cocked hat, shoes, and buckles.”

The leprechaun or clurichaun from T.C. Croker's Fairy Legends and Traditions of the South of Ireland (1862). (Wikimedia Commons)

Practicality, it seems, is also a concern among the fey folk. On the rainy west coast of Ireland, McAnally claimed, the leprechaun “dispenses with his [Elizabethan] ruff and frills and wears a frieze overcoat to protect his pretty red suit.” As such, unless passerby were to be on lookout for the signature cocked hat, a leprechaun walking down a country road might be overlooked entirely.

McAnally described many differences between leprechauns that could be found in different parts of Ireland, among which were:

The Northern Irish Leprechaun, who wore a “red military coat and white breeches, with a broad-trimmed, high-pointed hat, on which he would sometimes stand upside down.”

The Lurigadawne of Tipperary, with his “antique slashed jacket of red,” who was “also sporting a sword, which he used as a magic wand.”

The Luricawne of Kerry, “a fat, pursey little fellow whose jolly round face rivals in redness the cut-away jacket he wears, that always has seven rows of buttons in each row.”

The Cluricawne of Monaghan, classily-dressed in a “swallow-tailed evening coat of red with green vest, shiny shoes, and a long cone hat without a brim.”

You might note that McAnally’s descriptions appear to bastardize the word “leprechaun” to the point of unrecognizability. However, it’s likely that this Irish-American writer’s research became muddled over time with that conducted on the clurichaun, a different Irish fairy who is nonetheless similar to the leprechaun in that he is always solitary and always male. Known for his powerful love of alcohol and tendency to make his home in wine cellars, the folklore of the clurichaun is as amusing to read about as it is complex—however, some folklorists, including W.B. Yeats, have in the past suggested that the clurichaun is nothing more than a name for a leprechaun on a drinking spree. So much for the derogatory “drunken Irish leprechaun” stereotype—no matter who you believe they are, the real degenerates, it seems, are the rowdy clurichauns!

The commonly-depicted image of a leprechaun as a small, ginger-bearded man dressed in green is evidently a creation formed from other strands of European folklore, as well as a byproduct of the belief that that a large population of Ireland is redheaded (though studies have shown that the figure itself lies only at around 10 percent). However, at least a few traits of the character we recognize today are rooted firmly in real history—and while the end of the rainbow might be a destination that evokes skepticism, the association between leprechauns and gold has always been a strong one. Old superstition has it that if one is lucky enough to catch a leprechaun, they must demand that the creature take them to its stash of golden coins. However, in most stories, the person is easily outsmarted by this magical con-artist, who uses their greed against them to escape, wealth intact.

One such story involves a young man who, unable to carry the leprechaun’s pot of gold home by himself, demands that the creature bury it in the field in which they stand and place a unique marker on the mound, making it easy to locate when he comes back with friends to collect the bounty. Dutifully, the leprechaun does so, and promises not to dig up the gold while the young man is away. Later, the man returns to the field with his helpers, only to find that thousands of identical mounds and markers now dot the field, making it impossible to know the location of the coveted gold.

THE LEPRECHAUN IN POP CULTURE

Leprechaun’s gold (sometimes known, appropriately, as fool’s gold) consistently appears in pop culture as the leprechaun himself does. In the Harry Potter book series, leprechaun’s gold appears as real and valuable as legitimate magical currency, with the unfortunate side effect of vanishing into thin air after several hours. Interestingly, it seems that author J.K. Rowling also took inspiration from Welsh fairies in coming up with this trick: in Welsh folklore, it’s common that any gift or object given by the fairies will disappear if you’re unwise enough to tell anyone the truth about who you received it from.

The presence of leprechauns in pop culture, of course, is far from limited to literature. The 1959 Disney movie Darby O’Gill and the Little People featured a young Sean Connery, and told the story of an aging Irishman locked in a battle of wits with a kingdom of leprechauns, while incorporating other creatures from Irish lore, such as the banshee. Also very famous (or infamous, depending on your perspective) is 1993’s Leprechaun, an American comedy horror starring a heavily-costumed Warwick Davis in the title role. The film also starred Jennifer Aniston in her big screen debut. Often broadcast on St. Patrick’s Day, the film inspired five sequels (including Leprechaun 4: In Space and Leprechaun in the Hood) and a straight remake, starring American WWE wrestler Dylan Mark “Hornswoggle” Postl. 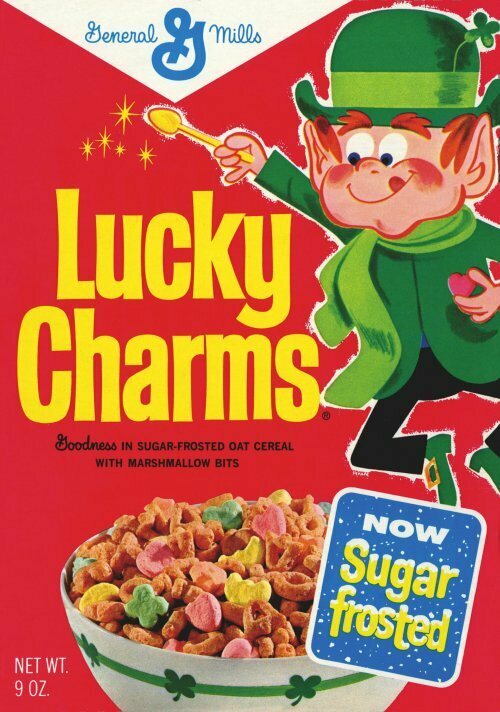 Outside of film, the image of the leprechaun is frequently put to work as a mascot for Irish-affiliated American sports teams, such as the Notre Dame Leprechaun, the feisty representative of the University of Notre Dame’s “Fighting Irish” athletics department, the Boston Celtics’ mascot Lucky the Leprechaun. Lucky shares his name with the mascot for popular American breakfast cereal, Lucky Charms, who appears in animated commercials as attempting to protect his “crock of gold”-esque cereal from marauding children, saying in a thick Irish accent, “They’re always after me lucky charms!”

The use of leprechauns as an emblem of Ireland is found commonly across America, particularly in bars and pubs run by expats of all generations. Once a benign symbol of good company, good drinks, and plenty of craic to be had, many now consider the leprechaun to be a gaudy and even offensive character who plays up to some of the less-flattering preconceptions many have regarding Irish people.

While it could easily be said that reports of leprechaun sightings are at an all-time low nowadays, it’s a subject that can’t be touched upon without due reference to the case of the Crichton Leprechaun, wherein a leprechaun was said to have appeared in a tree in Crichton, Alabama in 2006. The claim gained global attention when a news segment investigating the sighting was posted to YouTube, which had been online less than one year. The news clip became one of the video-sharing site’s first viral videos—as of today, its view count sits at around 28 million.

The story goes that on March 14, 2006, several Crichton townspeople witnessed a leprechaun sitting in a tree. Many of these people were interviewed by NBC affiliate news station WPMI-TV, one of whom was Demarco Morrissette, a local man who claimed Irish ancestry and showed off a special “leprechaun flute” that was supposedly thousands of years old. This earned Morrissette the nickname “Flute Man.”

Years later, in 2014, a local radio show known as The Bob and Dan show instigated a field investigation, interviewing the people of Crichton about their memories about the event. Many of the people interviewed claimed that the Crichton Leprechaun was, in fact, a local African American dwarf nicknamed “Midget Sean.” When Sean himself was interviewed, he admitted to having participated in a prank on the community, in which he donned a leprechaun outfit and climbed into the branches of a tree. His friends then began to spread the word of a leprechaun sighting, attracting the crowd to the spot where Sean sat. At last, the mystery of the Crichton Leprechaun had been put to rest.

The leprechaun—fascinating frontman of old Irish folklore, or an appropriated symbol plundered of character by overuse, both in Ireland and abroad? The answer, it seems, is somewhere in between. We’d love to hear your thoughts in the comments below. And if you'd like a leprechaun of your very own, check out ShamrockGift.com's leprechaun apparel and accessories.