Use Code TRISKELE at checkout

The triskelion (or triskele) is a triple spiral motif consisting of three symmetrical swirls or otherwise bent shapes emanating from a single point. It appears in many ancient cultures across Europe and Asia, but is most closely associated with Irish and Celtic art and design.

Earliest examples of the triskelion come from Malta, and many Greek vessels and coins have the spirals stamped upon them. Greek pottery even depicts warriors holding triskelion-embossed shields. Pliny the Elder believed that the triskelion in Sicily—where it is a symbol of the island both ancient and abiding, hence its continued presence on the flag—originated in the island’s triangular form.

Though many triskelion-adorned artifacts from continental Europe have survived, the triple spirals are today most commonly associated with ancient Irish culture and tradition.

A TRISKELION AT NEWGRANGE

In Ireland, the triskelion is widely accepted as a Celtic symbol, but its origins predate even the arrival of the Celts in the British Isles. The design figures heavily in Irish Neolithic art, most notably at Newgrange, the prehistoric passage tomb in County Meath. The monument was built circa 3200 BC, which makes it older than the Egyptian pyramids and Stonehenge. Newgrange is a large circular mound topped with grass and featuring a large retaining wall constructed largely of white quartz. Set atop a hill, its white exterior contrasts strikingly against the green grass above and below it, lending it the appearance of a kind of otherworldly fortress. It features one long inner passage lined with small chambers, in many of which human remains and burial offerings were found. The structure design was a relatively common one in the Neolithic era, and many passage tombs dot the Irish countryside, though Newgrange is the most famous. The tomb’s entrance was built to align with the rising sun on the winter solstice, when sunlight hits the roofbox (a specially designed opening over the door) at just the right angle to immerse Newgrange’s central chamber in light. Though time has stripped this phenomenon from its corresponding ancient rituals, the solstice still draws many tourists to the Boyne Valley hoping to witness the stone-age tomb bathed in winter’s first light.

At Newgrange’s famed entrance sits a massive stone ten feet across and four feet high carved with the triskelion symbol and other spiral patterns. This and the other stones of the structure themselves are remarkable—many of them were brought from the Mourne or Wicklow Mountains, both of which lie over 50 miles from Newgrange. The tomb’s original purpose is the subject of debate, but most historians and archeologists agree that it held some type of religious significance. Many point to the human remains as evidence that Newgrange housed rituals for a cult of the dead. Others believe that it was a place of worship for a faith based in astronomy. Certainly the sun and solar calendar played an important role in the beliefs of the people who built it.

Like Newgrange, there is no hard evidence pointing to the triskelion’s meaning in Celtic and pre-Celtic Irish culture, but credible theories abound, often related to the many triplicities in Celtic belief and life. Some examples of the trios the triskelion spirals are thought to signify: land, sea, sky; life, death, rebirth; past, present, future; father, mother, child; the three trimesters of human pregnancy; and many others. The three legs of the triskelion seem to move outward from the center, suggesting motion, especially circular motion, which was of utmost importance to the Celts, as many of their legends involved rebirth and, like many ancient cultures, believed the cyclicality of nature. The symbol is often associated with Manannán mac Lir, the Celtic god of the sea. Even today the sole decoration on the flag of the Isle of Man, which is thought to have been named after him (though some argue the reverse—that Manannán was named for the island), is three legs forming a triskelion spiral.

Whatever the motif’s meaning, or perhaps precisely because of its symbolic versatility, it figured prominently in Celtic design throughout Ireland and the rest of Europe. The spirals, as well as other geometric designs were common in the La Tène period (from roughly the fifth through the first centuries BC); art from this period was rarely figurative—human and animal forms did not appear frequently until after the spread of Christianity. Many examples of design from this period survive Celtic jewelry of gold and silver, often carved with repeating triskele or other similar designs. Jewelry could often be an indicator of status in Celtic society: many nobles wore torcs—ornate and heavy metal collars carved or stamped with intricate designs—and typically, the larger or more complicated the metalwork, the more important or powerful the wearer.

THE TRISKELION IN EARLY CHRISTIANITY

By the fifth century, when Ireland and the British Isles were the last strongholds of Celtic culture, Christianity began to spread throughout Hibernia. The already-popular triskelion was incorporated seamlessly into Christian iconography, as the three spirals could represent the Holy Trinity as easily as they did the multitude of pre-Christian triplicities.

The triskelion began appearing in Insular (early Celtic Christian) art, along with Celtic knots and Celtic crosses and is found continually in the designs of illuminated Celtic manuscripts. Many triskelion appear in the famed illustrations in the Book of Kells, in addition to detailed depictions of humans, animals, and plants, which had previously remained absent in Celtic art. The three whorls are also a typical decoration on round windows of gothic cathedrals all over Europe.

The symbol continues to appear in modern culture. In addition to decorating the flags of Sicily and the Isle of Man, the coat of arms of Füssen features three black legs in a triskelion spiral on a yellow background. It is the main design on the seal of the United States Department of Transportation and it inspired the insignia of the Irish Air Corps, which features an orange, white, and green tricolor swirl. A Breton football club, En Avant de Guingamp, incorporates the image in their emblem, as does the flag of Brittany. It is also a symbol of the BDSM community, which often uses a white triskelion-like symbol on a black background as their emblem. The image has been incorporated into modern Neopagan groups, who favor it for its Celtic associations and for many of the same reasons as the ancient Celts did, especially for its ties with Manannán mac Lir and with the belief in the triple goddess.

It even makes its way into science fiction and fantasy pop culture. A 1968 episode of Star Trek is called “The Gamesters of triskele,” and in the Marvel Comics universe, the intelligence agency S.H.I.E.L.D. uses a building named triskele as their headquarters. The 2011 MTV series Teen Wolf drew inspiration from Celtic lore and used the triskelion symbol regularly. In Merlin, a 2008 British fantasy series, the triskelion appeared as a symbol of the druids.

RCA’s “Spider” plastic 45 rpm adapter for vinyl records, which allows 7” 45 rpm records—which have a larger hole—to spin on players designed for 10” or 12” records, has a triskelion design. The design became a popular symbol among music enthusiasts, especially vinyl aficionados.

In Japanese Shinto culture, the deity Hachiman is known as the god of war—or more correctly, the god who instructs warriors—and his symbol is a triskelion-like spiral called a tomoe (translated often as “comma”). A threefold tomoe often adorns shrines to Hachiman, who is also associated with the number three, and it is commonly used as a family crest. One of the symbols of Tibetan Buddhism is called a Gankyil, a triple spiral called a “wheel of joy,” which represents many of the triplicities in Buddhist life: ground, path, fruit; the three humors in traditional Tibetan medicine—desire, hatred, ignorance; learning, reflection, meditation; essence, nature, energy; and many others. It features three blades, similar to the two of a Chinese Yin-Yang symbol, that form one circle. The Korean Taegeuk is of a similar design, usually featuring interlocking semicircles of different colors, and is associated with both Korean Daoism and shamanism.

Not all modern triskelion spirals have such positive and peaceful connotations, however. The Afrikaner Weerstandsbeweging (AWB), a South African neo-Nazi group, uses for their emblem a triskele formed by three black sevens in a white circle, surrounded by a red background. The image is modeled after the Nazi swastika. Formed in 1973, the AWB agitated to establish a purely Boer-Afrikaner (read: white) state, and during negotiations to end apartheid in the early 1990s, the group terrorized and murdered many black South Africans. As recently as 2016, the far-right group still claimed 5,000 members and was using social media as a recruitment tool.

The triskelion’s widespread use certainly speaks to the primacy of the number three in many religions and cultures all over the globe. Of course, it is still most widely recognized as a Celtic symbol. It can be found in Celtic-inspired tattoos and in modern Irish jewelry, where unlike its common counterparts, such as the shamrock or the Claddagh, the geometric swirls immediately hearken back to a more ancient, pagan Ireland.

Now that you know the origin and meaning of the Irish triple spiral, browse below to see some of our favorite modern designs that incorporate this ancient symbol!

ShamrockGift.com offers a great range of Irish basics featuring the triskele pattern from brands like Malham and Traditional Craft. These designs are some of the most recognizably Celtic in the collection and can make a fantastic gift for the design lover on your list. Shop our Triskelion Celtic Tees, Hats, and Hoodies below!

Adapted for use by Aran Woollen Mills as their brand logo, the triskelion comes standard on many of their accessories, like this knit cap (look closely at the buttons) and stamped on the outside of this gorgeous leather purse. Other companies have incorporated the design into their prints, like Patrick Francis, which uses the triskele in their gorgeous Pashmina style scarves that are inspired by the Book of Kells! 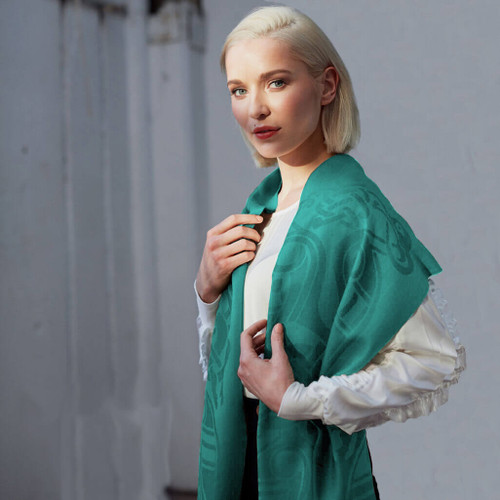 Celtic Triple Spiral Jewelry featuring the triskele design is among our most popular sellers. The symbol's mystery and beauty make it an increasingly recognizable symbol of Ireland and the spiral motif can be accented with many colors. If you're looking for something unique and uniquely Irish, shop our range of triskele jewelry for your next Irish gift. 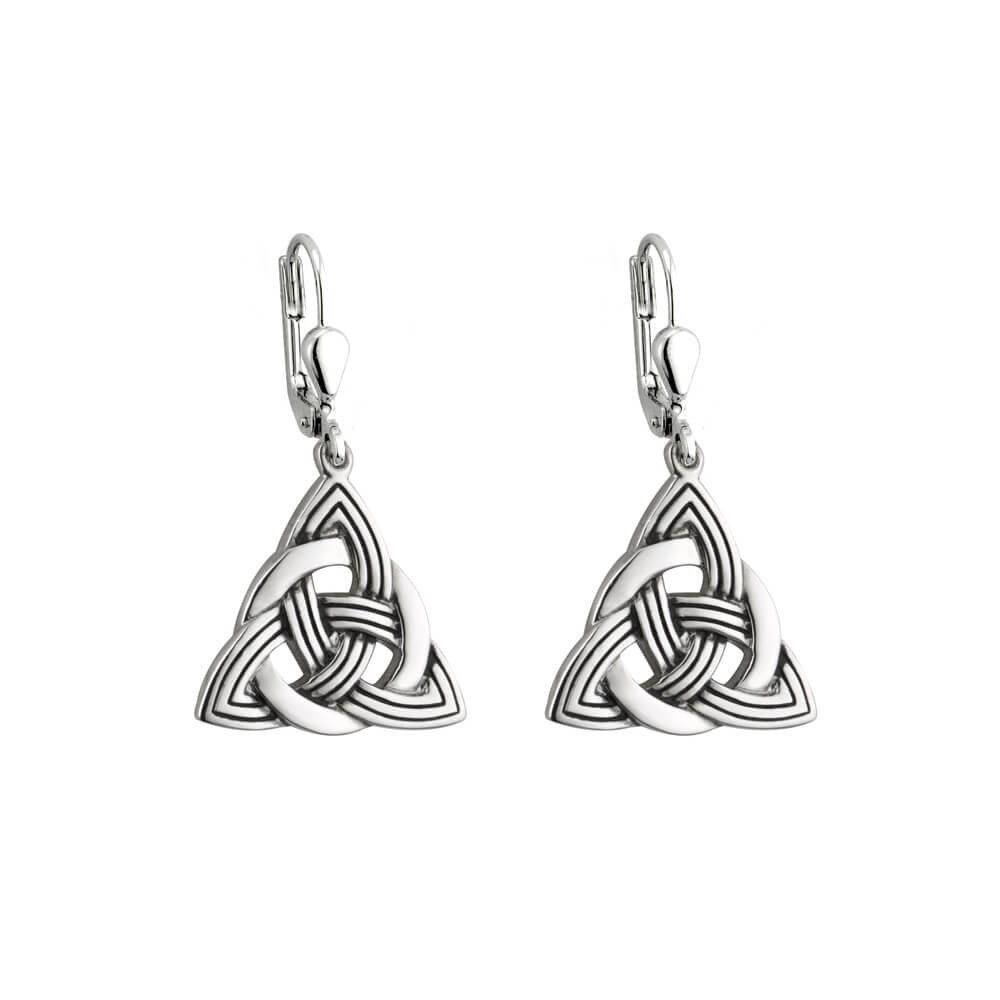 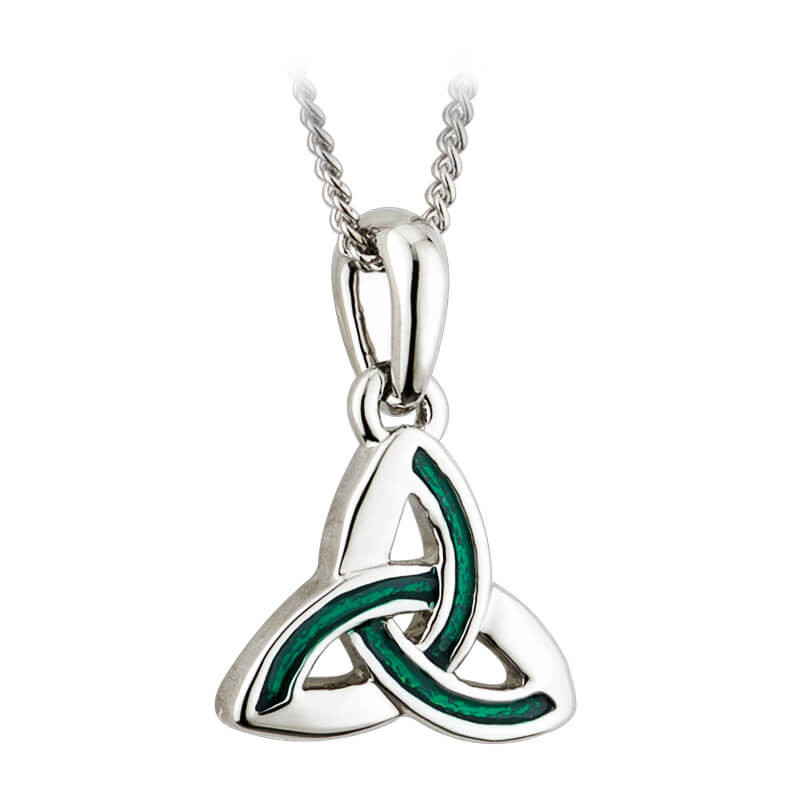 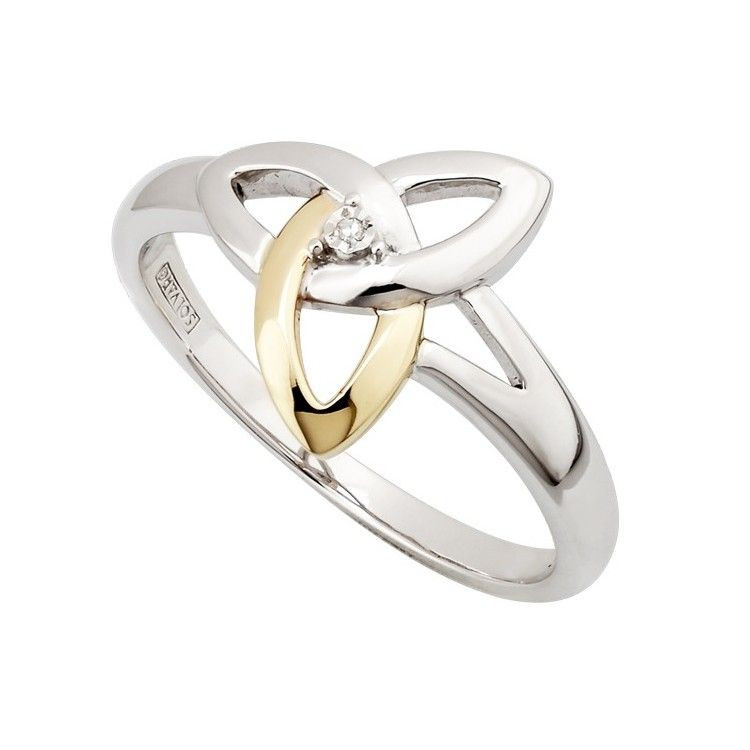 In addition to jewelry, apparel, and personal accessories, ShamrockGift.com also offers a great selection of homeware that feature the triskele design. Sometimes, the design is front and center like the Charles Gallen Tea Towel or the Shamrock coasters by Royal Tara, while other times is is a bit more subtle (look closely at the detail of the white sheep's wool and you can see it there). We love this design and want to provide as many ways to spread it as possible. 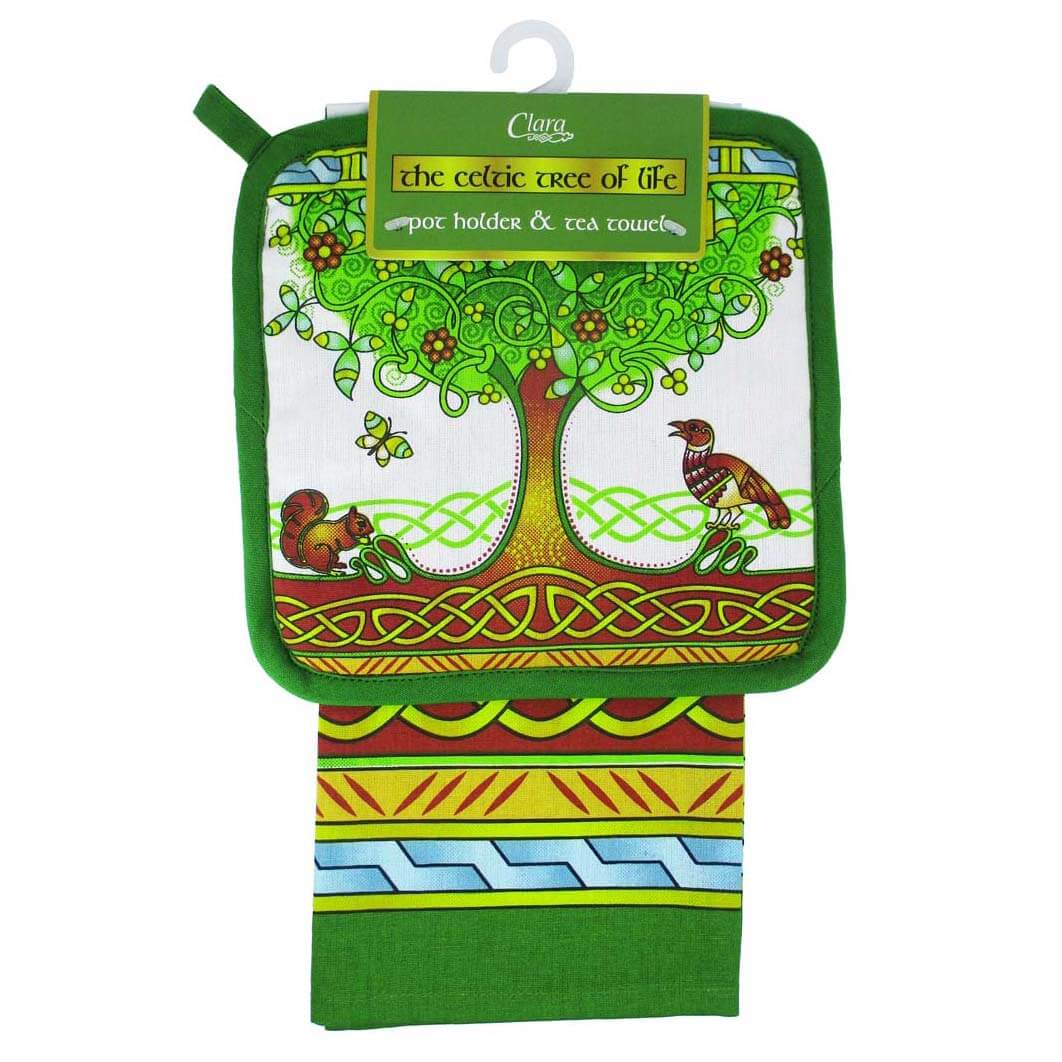 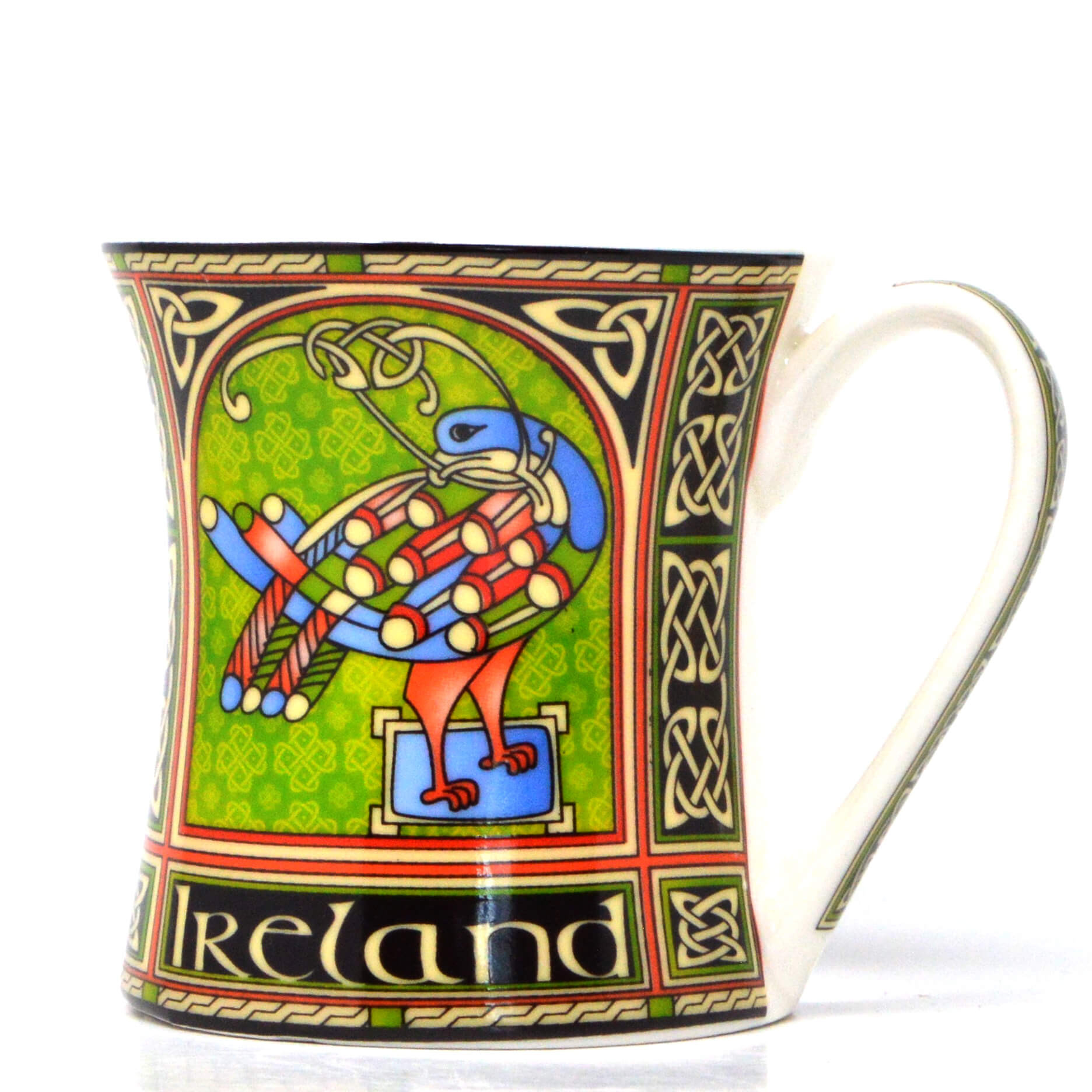 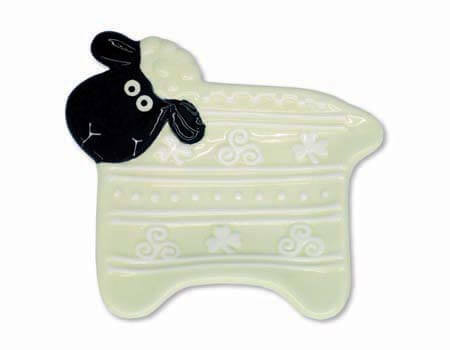 And Our Top Triskele Recommendation is... 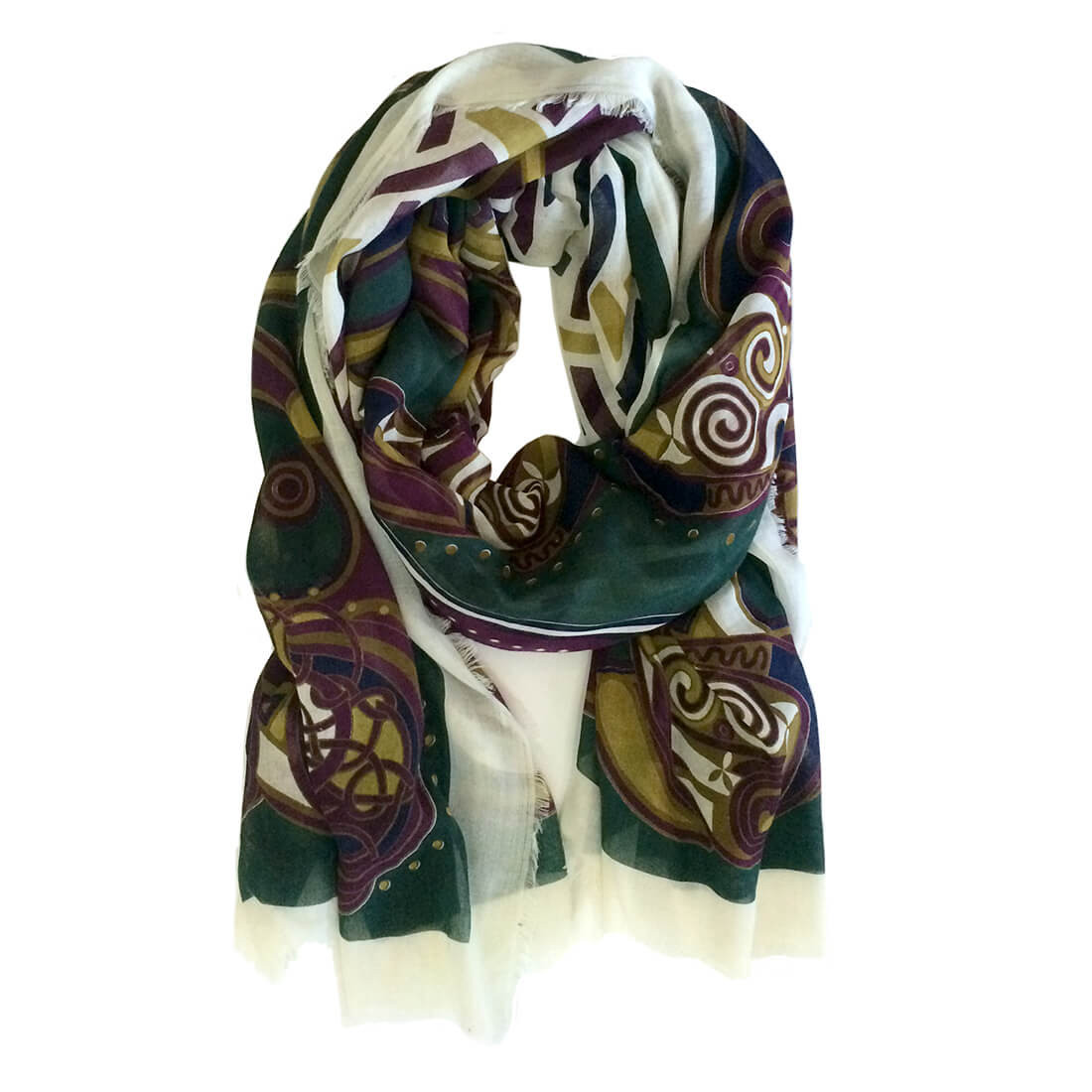 Inspired by the Book of Kells, this silk scarf from Dublin-based Patrick Francis incorporates not only the triple spiral but a host of other unique Celtic knot patterns in rich purples and greens. Style it with any outfit to carry your Irish heritage with you wherever your errands take you.

Use Code TRISKELE at checkout