Many say that a society can be measured by its culture. The western city of Galway is a must see. The distinct character of city is a bohemian rhapsody along the Atlantic, and its surrounding area is rich with urbane tastes, astounding nature, great music, and friendly people. If there one, two, three or more days, this Western coastal locale is true to roots and is an authentic experience outside of any other making it a popular vacation destination.

Once arriving in any city, it is best to start right at its heart. Galway, although not a intensely bustling urban metropolis, its city center is a hub of activity with Eyre Square as the nucleus. Officially now known as the John F. Kennedy Memorial Park, this public space offers a leisurely as well as lively departure from city life with green, grassy lawns, trees, benches and even public art. Quincentennial Fountain incorporates an modern abstract sculpture of dynamic angular shapes depicting one of Galway’s most emblematic elements, a Hooker fishing boat, with animated hydraulics. The life aquatic is essential to the soul of the city, its history and culture. Installed next to the fountain is the Browne Doorway, a snippet of Galway’s past grandeur. The seventeenth-century doorway from a Renaissance manor shows the wealth and prominence Galway experienced at that time as a port and coastal city along the Atlantic. The iconography includes the archetypal medieval symbolism of coats of arms, which represents the joining of two affluent families within this family home. Another relic of Galway’s past, the Spanish Arch, closeby, is one of the most notable historical ruins in Galway. Built in 1584 as a fortification to protect merchant ships from being looted. And, off Eyre Square in City Centre, is Shop Street a charming stroll for browsing and fabulous finds.

Thomas Dillon’s Claddagh Gold, located on Quay Street, was established in 1750. They are the original makers of the Claddagh ring and are also the oldest jewelers in Ireland. (Stephen Power / Tourism Ireland)

Galway’s mixture of the urbane and rustic has created a treasure trove for the foodie’s delight. A day could be made of sampling and savoring all the city has to offer from traditional and regional favorites including Michelin-starred nouveau cuisine. Past and present is artfully intertwined through food and drink in this city. Galway Food Tours provides several options for afternoon or evening indulgence that include an art house & cinema tour, a whiskey tasting tour, a food & cycling tour (burn those calories off as fast as you consume them!), and tour for those with a sweet tooth. Tour guides, Sheena and Gosia, have a combined experience that is rooted in the region and city as well as professionally proficient in the wine and culinary industry. For a contemporary and cosmopolitan dining experience, Loam, located just off Eyre Square, is a top choice. The basis of the restaurant’s ethos is to capture the west coast tradition and region by working with local farmers and producers for a seasonally inspired tasting menu. The award-winning restaurant is Michelin-starred and its owner and head chef, Edna McEvoy, was voted best chef in Ireland at the 2016 Irish Restaurant Awards. Loam’s wine bar is renowned too with an extensive and rich international array. If partaking in pub culture is more your cup of tea, Garavan’s, City Centre, is an optimum choice for excellent whiskey and gin, a pint of Galway’s local craft beer Hooker, and a cozy, relaxed ambiance. Its long, proud history dates 80-years back with an emphasis on serving up great whiskey. Beautifully crafted wood cabinets display their current varieties and old style Guinness bottles are part of the interior charm. A whiskey platter for a curated sampling is a good starter if overwhelmed by the abundant choices. 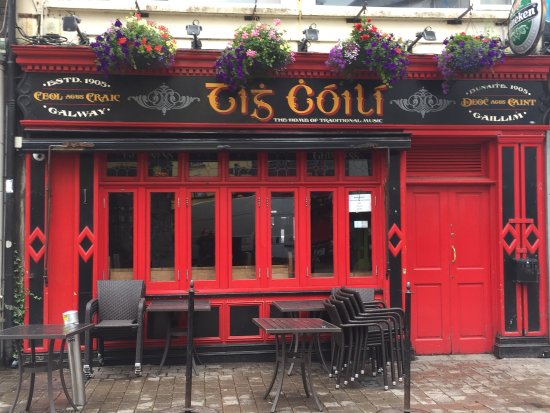 Beyond Galway’s center, strolling through neighborhoods offers more discovery. The Claddagh, not far from city center, and dear to Galway residents, it also embodies the city’s soul with quaint streets, lively and of local color. It remains a mainly middle class neighborhood and continues to draw upon its history as a fishing village, which dates to the fifth century. Gone are the thatched fishing cottages of old, mostly destroyed by the 1930s; however, their customs endure. At the spot where the Corrib river meets Galway Bay, the area’s fished seafood often passes through the Claddagh. And, of course, the iconic claddagh ring owes its storied fame to Galway and the Bay’s Aran Islands. The claddagh ring, depicting two hands clasping a heart with a crown atop, a trinity that represents friendship, love, and loyalty, is used to visually mark the neighborhood as signage. The design traces its roots to Galway with the legend of Robert Joyce, a fisherman who was captured by Algerian Corsairs before marrying his great love. He was sold into slavery to a Moorish goldsmith where he learned the craft. Once freed, Joyce returned to Galway, and his love, and created the ring marking their lasting love and devotion. The Claddagh Ring Museum on Quay Street delves into the history of the famed adornment with a petite shop. For good eats, nearby on Sea Road is Kai Café, a casual restaurant with a rustic home charm. The food is locally sourced, including seafood, and cooked creatively which has earned them two Michelin stars. Another close option is award-winning Oscar’s Seafood Bistro, on Dominick Street, where it is all about the fruits from the sea and keeping much within the spirit of Galway and the Claddagh.

If only for a 24-hour stint and want to see more than Galway city proper a walk along the Salthill Promenade, or “The Prom”, reflects the beauty of seaside nature and the essence of this Atlantic locale on the rocky northern inner shore of the Bay extends approximately 3 kilometers (about 1.8 miles). Easily gotten to within 5-10 minutes from anywhere in Galway City, the dramatic vista looks all the way to the Aran Islands is perfect for a sumptuous sunset, a jog, a bike ride or a picnic with some fish and chips possibly from McDonaghs, a favorite seafood joint with tourists and locals alike. This Galway institution on Quay Street has been in the hands of four dedicated generations, since 1902, and offers a wide selection of seafood from salmon to scallops with their fish and chips its jewel in the crown. Kicking the stony “Prom Wall” is said to give you luck. After your invigorating stroll and a toe tap on the wall, O’Connor’s pub is right there for a some imbibing and good live music. Galway is known for some of the best Irish folk music as well as talented musicians. O’Connor’s unique and quirky interior is jam-packed with knick-knacks and curios.

Spending a little more time in Galway is well worth the time spent. A trip to Aran Islands is requisite, one of the most traveled, exhilarating and romantic spots in Ireland, rich with several fascinating historical monuments as well as awesome natural land and seascapes, and white sandy beaches despite a slight tinge of bleakness. It’s often considered one the most authentic Irish experiences that can be had. Inishmore (or Inis Mór) is the largest of the group of three islands, which includes Dún Aonghasa, a prehistoric circular fort of mainly limestone perched along the cliffs and dating to approximately 1100 BCE. The terrain is rough and appropriate apparel is suggested touring. The cliffs, extending the entire western edge of the island, are breathtaking and are one of the most impressive and enchanting views in all Ireland. Another remarkable attraction on Inishmore is the Seal Colony. It’s accessible to wander through this natural habitat, especially if cycling, becoming more immersed in nature, and, if very lucky, spotting some seals sunbathing on rocks jutting from the water. Another significant and popular site is the Worm Hole, an unusual, naturally formed rectangular pool at the bottom of the cliffs south of Dún Aonghasa. Amidst the stony cliffs, the pool relies on the ebbs and flows of the sea and is now the location for the Red Bull Cliff Diving Competition.

The rugged, yet romantic, Aran Islands is much like stepping into Celtic times, not only due to its quintessential preserved natural beauty, but its culture remains rooted in tradition. The locals mostly speak Irish and their seafaring and fishing traditions continue to thrive. The iconic Irish thick wooly sweaters with vertical knit patterns come from the Aran Islands. The wives of fisherman knitted the pullovers to keep their husbands warm while out at sea, and their humble style still has appeal today. Inishmore, also, has some of the best seafood with numerous eateries and friendly pubs. Tí Joe Watty’s pub has a strong local clientele, live music, excellent seafood, premium whiskey, and local craft beer, and Kilronan, the largest town on the island, provides numerous superb pub options. A venture to the other Aran Island Inishneer or have unpretentious and welcoming venues as well. Tigh Ned on Inisheers is easy on the wallet and with simple selections for food, good fish and chips, and local craft beers. On Inis Meáin is Teach Ósta offers up toasted sandwiches with a nice mix of locals and visitors. Albeit smaller than Inishmore, Inisheers and Inis Meain also possess extraordinary scenery and historic sites. Locals still make a pilgrimage to the Well of St. Enda–the patron saint of the Aran Islands and legendary folk warrior hero–at Tobar Éinne, a natural bubbling spring on Inisheer. Local lore states that if you are fortunate enough to see an eel, your tongue will be bestowed healing power to, literally, lick wounds away.

An additional sojourn outside of Galway city is Kinvara, the seaport village on the southern shores of Galway Bay. The outing makes for a picturesque Dunguaire Castle built by the O Haynes in 1520. The castle was well-known for its medieval-style banquets lending to a Kinvara a reputation and culture for indulging in drinking and feasting. It’s a great town for renting a bicycle and a cozy linger in one of the many local pubs. Green’s Bar is a terrific spot for a nip of whiskey and refreshment in Kinvara. The town is easily accessible by bus or car.

Around Galway city are more marvelous activities and awesome sites for another day’s outings. A cruise on the river and lake Corrib for a less rugged and more lush and majestic green landscape with rolling hills. Some cruises offer commentary and follow routes for optimum views of historic sites along the banks of the river. The voyage is also an opportunity for considerable wildlife viewing. Hawks, otters, bats and even minks all exist around this waterway. A cruise at dawn has the potential for a symphony of nature’s sounds, including a critical mass of several species of birds. Also along Galway Bay is Connemara Island for more environmental wonder of land and sea and a great remedy for the pace of city life. The remote island across the Bay has boglands, incredible skylines, mountains, an awe-inspiring coastline, and wild foliage. The village of Leenane has Ireland’s only fjord. Connemara offers several activities such as horseback riding, scuba diving and hiking. Ballynahinch Castle, also an inn, has great food and lovely gardens at a reasonable price.

Galway’s artistic culture should be considered when planning a visit to Galway. The becomes ever more animated during the summer with Galway International Art Festival, with an emphasis on performing arts, and the Galway Film Fleadh, a six-day festival of international films. Both run in the month of July. There are many fans for the tasty International Oyster and Seafood Festival happening every September and approached a la Mardi Gras style with talks, events and competitions in addition to indulgence.

Relishing Galway certainly is an enriching experience. Local flavors of fine and traditional foods, the untamed natural beauty, its history and relaxed pace strike a balance that is uniquely pleasurable and uplifting.