“Guinness is good for you” proclaims the text. A colorful toucan smiles serenely with two pints of the black stuff balanced easily on its giant beak. This iconic vintage Guinness poster decorates the walls of Irish pubs and homes of beer lovers worldwide. The image is instantly recognizable for anyone who’s ever enjoyed a creamy pint of the famous beer and today can be seen on merchandise ranging from a Guinness toucan mug to Guinness Toucan Metal Sign and bottle openers. But many don’t know the story behind the smiling Guinness toucan. What does a bird who makes its home in sunny South and Central America have to do with beer from the Emerald Isle?

The origins of the Guinness toucan are more playful than logical—an apparent non sequitur that launched one of the most memorable beer ad campaigns in history. 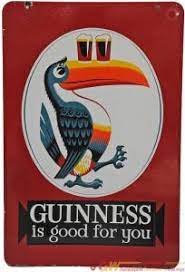 One of the first Guinness toucan posters to feature what would become one of the brewery's most recognizable mascots. (Guinness)

First, a little history on the beer itself.

On New Years Eve, 1759 Arthur Guinness signed a 9,000 year lease on a run-down building in the neighborhood of St. James’s Gate, Dublin. Guinness had run a small brewery back at home in County Kildare, but at the age of 34, wanted to try his luck in the country’s capital.

The 9,000-year lease might have seemed a risky move to some, but it quickly became abundantly clear that the bold move paid off. Ten years later, in 1769, Guinness exported six barrels of beer to England. In 1799, dark beer called “porter” (primarily for the profession of those who drank it) became popular in Dublin; instead of adding porter to his offering of brews, Guinness halted production of all other styles and chose to focus entirely on the dark beer. By 1821, the brewery had perfected its recipe for porter. That Guinness is still the most iconic dark beer in the world should be proof of Arthur Guinness’s forward-thinking business savvy.

On the 16th of October, 1817, eight barrels of Guinness porter made the intrepid journey across the Atlantic to a man named John Heavy in South Carolina. Guinness had made it to America, where its legacy would continue to grow as waves of immigration grew the Hibernian population there. Forty-one years later, when other Irish breweries chose to play it safe on the domestic market to avoid treacherous sea voyages, Guinness was available as far away as New Zealand. 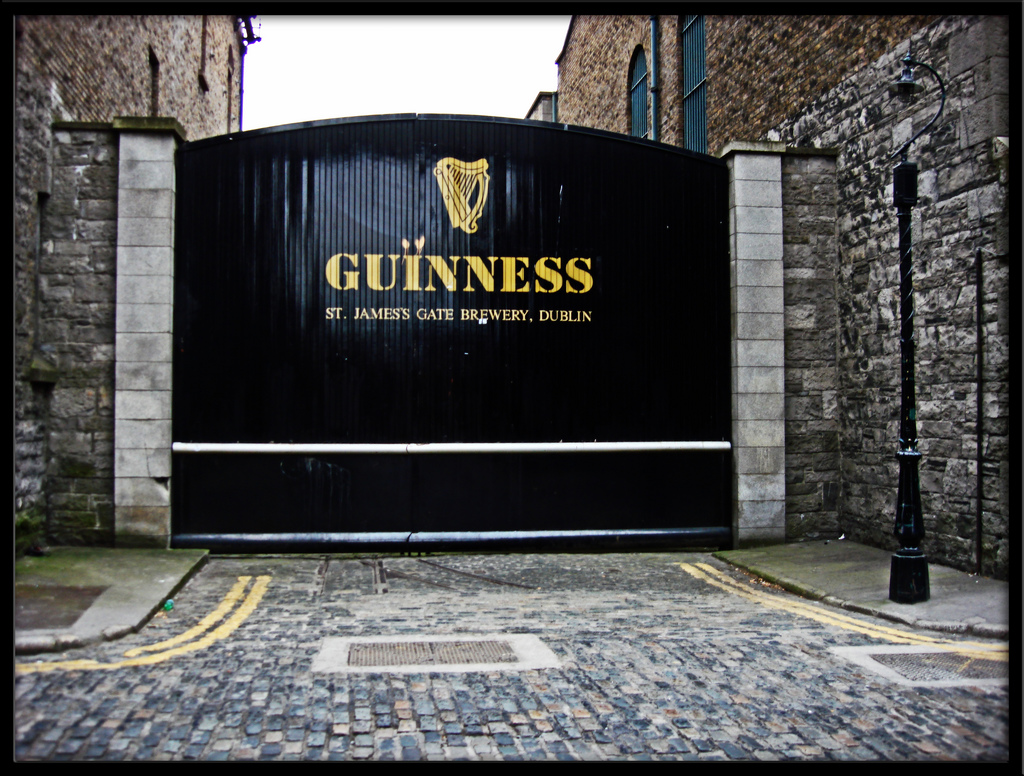 The entrance to the Guinness brewery at St. James's Gate in Dublin, where Arthur Guinness signed a 9,000-year lease in 1759. (Stephen Sweeney / Geograph Ireland)

For nearly two centuries of existence, the brewery had almost no need to formally advertise, allowing word-of-mouth to sell the beer, and sell it did. By the late 19th century, Guinness was one of the top three breweries between Britain and Ireland. In 1862, the company adopted an Irish harp as their logo and trademarked it in 1875. However, by the late 1920s, sales were declining, and in 1929, Rupert Guinness, then chair of the company, ran the first-ever Guinness print ad with the slogan “Guinness is good for you.” The very next year, the brewery hired advertising firm S.H. Benson. It was then, in 1930, that the story of the Guinness toucan began.

The man responsible for the iconic bird and his animal companions is the English illustrator and draftsman John Gilroy. He was born in 1898 in Newcastle upon Tyne into a family of eight children, and his father, William, was a landscape painter. From a young age, Gilroy began copying the drawings in magazines, and it was quickly evident he would follow in his father’s professional footsteps.

By 15, he was a cartoonist for the local newspaper. He won a scholarship to art school, and although World War I interrupted his studies, he entered London’s Royal College of Art in 1919. While he was still a student, he received his first commission for commercial art—a promotional pamphlet for the Hydraulic Engineering Co. Not long after graduating, Gilroy began working for S.H. Benson, where he would eventually work on Guiness. 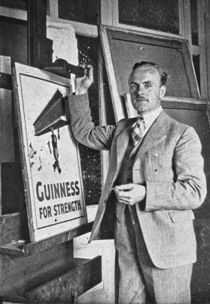 John Gilroy, illustrator of some of Guinness's most well-known advertisements. (Northeast History Tour)

His first work with the firm was on campaigns for Skipper Sardines and Virol (a brand of malt extract). In his early years at Benson, he and his colleagues created clever characters to make their designs memorable: Baron de Beef, Signor Spaghetti, Miss Di Gester. All these playful characters likely primed Gilroy for the fun and whimsical designs he would eventually draw for Guinness in his 35 years working with the company.

In the early 1930s S.H. Benson boasted an impressive staff of creatives beyond John Gilroy; the late Dorothy Sayers, now famous as a crime writer and poet, wrote copy for the agency. When Guinness approached the firm, they had an interesting request: the final advertising campaign should not be too much to do with beer, despite the fact that it was advertising—well—beer. They thought it would be vulgar. Instead, they preferred something that appealed to families and that highlighted the purported health benefits of the brew.

They asked Gilroy to draft an ad showing a family drinking Guinness, but no one could seem to agree on what the family should look like, nor how they should be presented. Luckily, it was precisely family that led Gilroy to the particular idea that eventually spawned Guinness’s most famous ad campaigns. The artist had recently taken his son to the circus, recounts Guinness archive manager Fergus Brady, and had watched a sea lion balancing a ball on its nose. He realized how fun it would be to draw a sea lion balancing a pint of Guinness on its nose, and pitched the idea to Guinness. From there the series expanded to an entire menagerie. Gilroy drew ostriches, bears, pelicans, kangaroos, and of course, the toucan.

Paired with Sayers’s inventive copy, the ads took off. In her most clever ad, she plays on the toucan / two-can homophone and on the idea that drinking Guinness offers a range of health benefits: “If he can say as you can / Guinness is good for you / How grand to be a Toucan — / Just think what Toucan do.” The illustration features a smiling toucan perched next to two shining pint glasses full of Guinness stout. 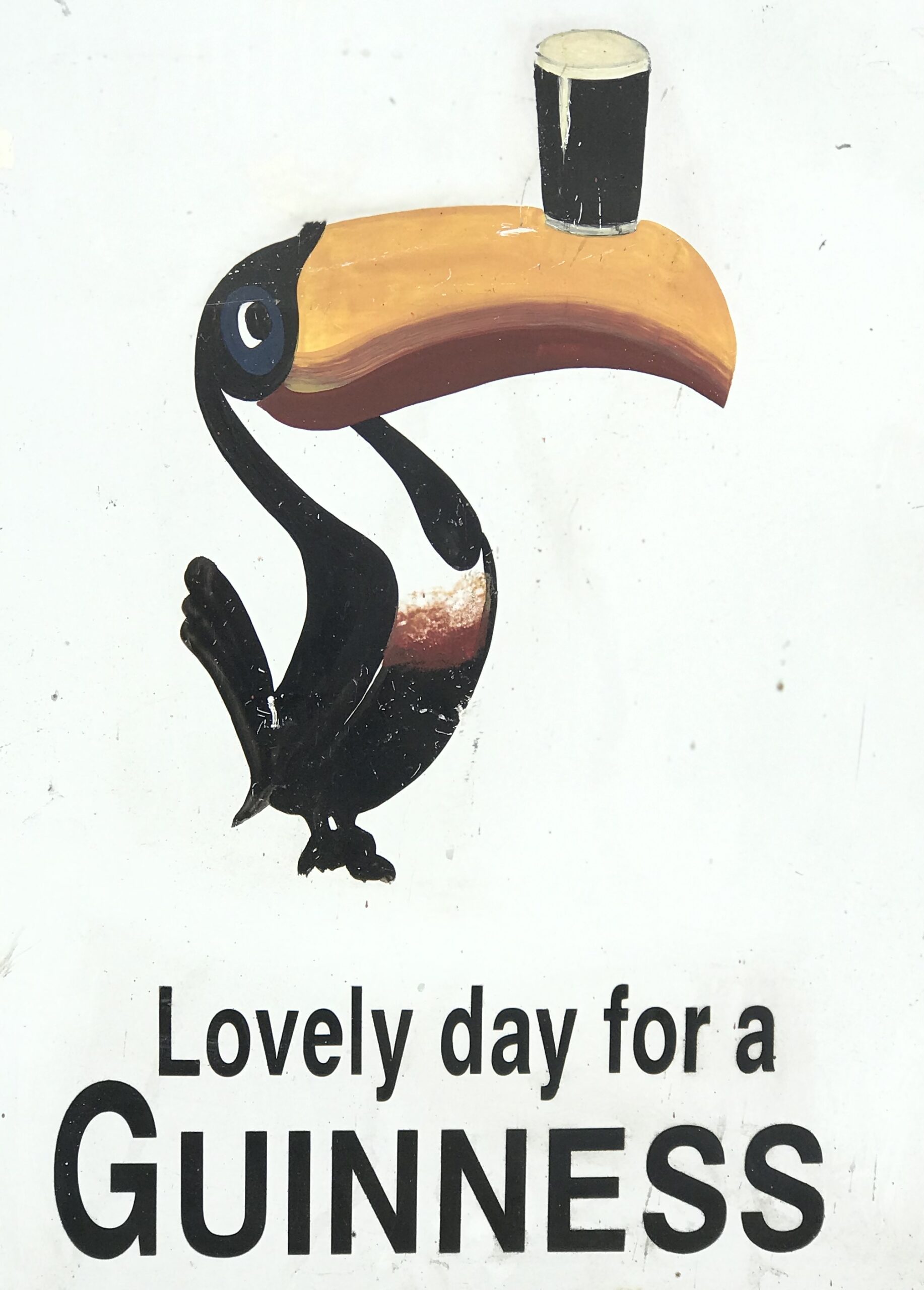 Gilroy even created toucan ads specifically for the American market with the birds flying over landmarks like the Statue of Liberty, Mount Rushmore, and the Golden Gate Bridge—always carrying two pints on their beaks. Sadly, Guinness never approved and ran the ads.

Over the years, Gilroy created nearly 100 advertisements and 50 poster designs for Guinness. Though he left S.H. Benson as an in-house artist in the 1940s, he continued to freelance for them and continued to create the beloved Guinness zoo ads, crafting new scenarios for his Guinness-loving animals and their beleaguered zookeeper.

Other vintage Guinness ads from the time feature simpler jingles and catchphrases. “My goodness—my Guinness” often features an animal stealing a man’s pint in comical fashions—an ostrich swallows it, a kangaroo hides the bottle in its pouch, a crocodile holds the pint between his massive jaws, and so on. In another, a smirking tortoise carries a pint on its back under the text, “Have a Guinness when you’re tired.” A man pulls a cart while his horse relaxes and goes for a ride—“Guinness for strength.” There is a playfulness to all of them. Even the ad in which a man is being chased by a lion feels funny—of course, the lion is chasing the man not to eat him, but to steal his beer. The lion is smiling, his tongue lolling out of his mouth as he runs, and we’re in on the joke: he’ll get the Guinness in the end, and the man is panicking not to save his skin, but to save his beer.

The ads ran primarily in the U.K. and in the 1930s and 1940s were immensely popular—likely the cheerful, cheeky animals and bright colors provided a small antidote to the horrors going on in Europe at the time. In 1939, all troops in the British Expeditionary Force in France received a bottle of Guinness with their Christmas dinner.

The company remained committed to adding a touch of whimsy to their generally solid and forward-thinking business practices. To celebrate Guinness’s bicentennial in 1959, the company dropped 150,000 embossed bottles containing Guinness-related information and paraphernalia into the Atlantic Ocean. It is the same year, as well, that Guinness employed scientists to create the Guinness Draft we know today by pairing nitrogen gas and carbon dioxide—it is that combination that gives the beer its prized silky texture. In in 1963 and 1965, Guinness opened breweries in Nigeria and Malaysia, respectively, cementing the company’s global reach and impact.

As the company modernized, so too did their advertising strategies. In 1982, the Guinness brewery switched ad firms and stopped running the zoo-themed ads—the toucan and its friends were no longer considered effective advertising techniques. However, nostalgia for the Guinness toucan remained, and the company has released limited-edition cans and merchandise featuring the original Gilroy drawings. In 2017, the 200th anniversary of Guinness in America, they released a number of decorative items imprinted with the image of the two-pint-touting toucans flying over Mount Rushmore. The image of Gilroy’s toucan still immediately brings Guinness to mind, and it remains an immensely memorable mascot of the world’s premier dark beer. 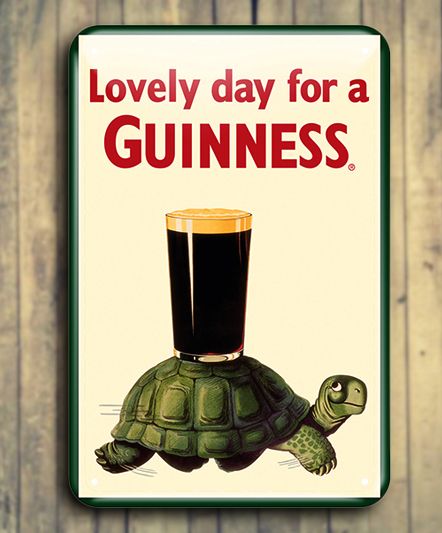 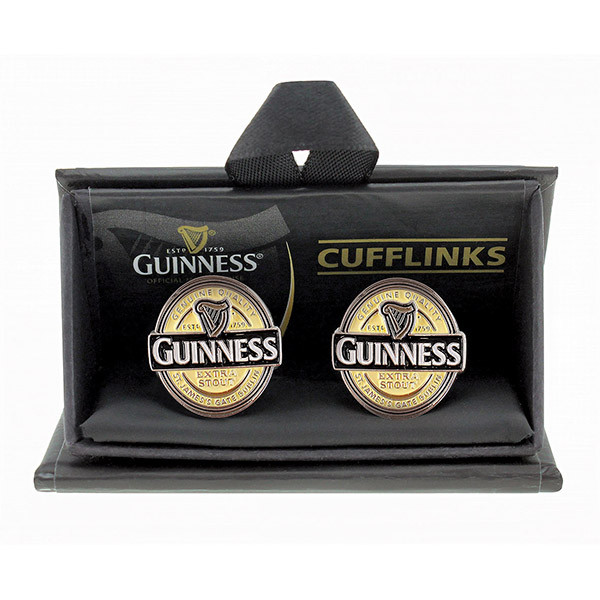 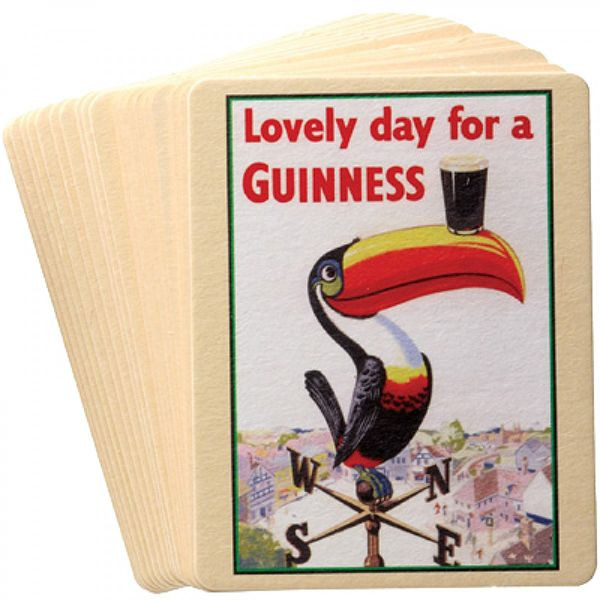 ShamrockGift.com sells the widest selection of Guinness merchandise in the U.S. See all products, including the Guinness toucan, here.